It has been the coldest for several years across the country.  Here in Miyama is no exception.  Since last December, mountains in Miyama had been covered by snow several times.  We actually had some snow in the begging of March! The temperature at Kyoto Miyama still marks minus degree in the morning in the second week of March.  It was the coldest winter in 10 years. 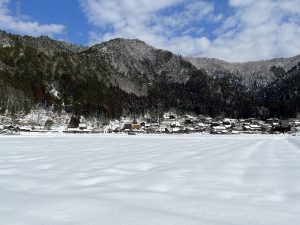 That means, many visitors to Miyama during this winter enjoyed a beautiful mountain landscape covered by snow. Some of them who stayed overnight in Miyama may have encountered the priceless snowy landscape under blue sky when they woke up in the morning.

In addition, a lot of visitors enjoyed Miyama’s thatched village illumination in February.